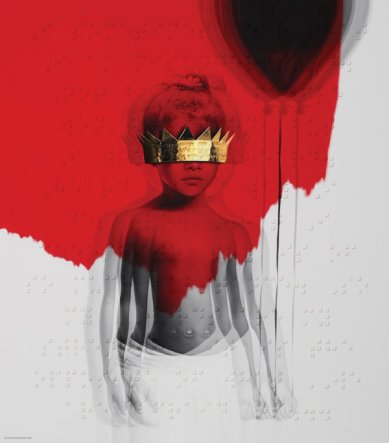 Sooooo after MUCH ANTIcipation, Rihanna has finally delivered her 8th studio album  “ANTI” late last Wednesday night. We started our review immediately after it dropped, but with all the madness that ensued the following weekend (i.e. the Wiz/Kanye/Amber Rose fiasco and Drake dropping yet another bomb on poor Meek with the release of “Summer Sixteen“) we just now found the time to collect our breath (and edges) to finish this post. We initially reviewed the 13-track version, but a few days later she released the deluxe edition with three new songs (“Pose”, “Sex With Me” and “Goodnight Gotham”) and we revisited our post to include those as well. So, lets get to it!

Track 1 | Consideration (ft. SZA)  – Perrrrrfect intro! This song sets up the overall theme of the album: the swag, the cool, funky-fresh beat and the strong delivery of both Rihanna and SZA instantly grabbed our attention in anticipation for the rest of the songs. The unlikely collaboration of these two ladies was everything we never knew we needed: their voices fit together perfectly and the harmonies were so on point that you couldn’t tell the two apart at times. The best part about this collaboration is the fact that Rihanna was able to look past the shade SZA threw her way a few years ago (search Twitter for the old tweets if you must) and come together to create something beautiful. Props to the both of them for being such a good example of what happens when dope women link up, and we hope this is the first of many collabs from them to come!

Track 3 | Kiss It Better – Remember when her producer/songwriter John Glass went OFF on social media and threatened to leak this song early, claiming it to be the best song she “has ever done in her life”? He lowkey wasn’t lying! This song is clearly one of the standout tracks on the album–from the production to her lyrics and the way she sings them–it has that sexy, throwback, Prince-vibe that makes it an instant classic. This song will for sure give Rihanna another #1 single under her belt and we’re sure the video will be just as amazing. (Sidenote: Chris Brown would sound reaaaalllly good as a feature, just saying 👀)

Track 4 | Work (ft. Drake) – This is a classic Rihanna, dancehall-style bop that quickly captured our hearts (and our hips). Whether you can understand what she’s saying or not, the beat is impossible to not move to. In fact, there’s a new trend on the internet called the #WorkDanceChallenge, where fans are winding their waists for the gawds to this hit. The album wouldn’t be complete without this type of track and we appreciate her for including it (and the Drake feature doesn’t hurt either).

Track 5 | Desperado – This might be our favorite song on the album as of now. It is very dark and theatrical, and the title matches up to the sound perfectly–it sounds like it could be featured in a Quentin Tarantino movie trailer or an episode of Sons of Anarchy. She’s clearly creating on a high level and the detail and artistry in this song shows just that. She knew exactly what she was doing when she recorded this song, its perfect 😭.

Track 7 | Needed Me – For the Rihanna fans who live to see her flex her “cockiness”, this is the song for you. Its a club banger for sure, where she puts a man in his place reminding him that he was “just another ni**a on the hit-list” (WELP 🙃). It’s what you would expect from a song like this, catchy lyrics, heavy bass (Mustard on the beat, heaux), etc. but its a great song to bop to with your girls in the club if you’re in the mood to stunt on an ex or two 💅.

Track 9 | Yeah, I Said It – YASSSSSSUHHH! This is Rihanna at her core, sultry and sexy and bold. Timbaland really went in on the production, it literally rides like a wave and its so easy to get lost in and vibe out to. Only complaint here: it should be longer 😩!

Track 11 | Love On The Brain – We must say, we were definitely taken aback when this song came on and heard how soulful the sound was. We almost didn’t recognize her in some parts (she’s giving Joss Stone/Andra Day teas heavy) but this is the track where she clearly soars and shows her growth vocally. Simply put, she straight kills it. You can hear the emotion in her voice and whether you can relate or not, you can’t help but feel what she’s saying. Such a departure from her usual sound, but she did it so well we can’t complain one bit.

Track 12 | Higher – Riding the same wave as the previous track, Higher is again a more soulful and emotional song unlike anything we’ve ever heard from her. At first listen, her vocals may throw some people off because, lets face it, you can clearly hear the struggle in her voice. But that’s what makes the song so beautiful–its pure, raw, and honest. We’ve all been where she is on this song before, and after a few spins (and dranks), you’ll find yourself rocking and singing along sounding just like her 😪.

The rest of the songs (Close To You, Pose, Goodnight Gotham) were good, just not great. Maybe they’ll grow on us 🤔.

Overall, this album is very solid and will satisfy Rihanna fans old and new alike. She has something for everyone and every style, while still remaining true to herself and her creative vision. This is the album where she puts Rihanna the “pop star” in the backseat and lets Rihanna the artist take the wheel. Her growth as a singer also shines through as we hear her hitting notes and singing melodies and runs she’s never even attempted to try before and the lyrical content was on point as well. Each piece fit well into the puzzle and there was no fluff or fillers–this is a complete work that you can play all the way through, and then a few times again. Its evident that she took her time with this project (over 3 years, to be exact) but she delivered 100% and we take back any sh*t we may have talked while we were patiently waiting for to be blessed with this classic album. That Rihanna reign just won’t let up! 👑🙏

“ANTI” is currently available on to purchase on iTunes and to stream on Tidal, do yourself a favor and go listen now!